Welcome back! Before we kick off with this section, one thing needs to be said which applies to most if not all clinical diagnoses, that is none of these tests can give a definitive diagnosis, only indications! So you could say that our clinical testing produces a ‘diagnostic indication’. Many clinical tests have high sensitivity (saying: yes, there is something wrong) with low specificities (saying: But, I cant tell you exactly what it is), this is good when you have a negative result as it can be used to rule pathology out (SNOUT). Alternatively they may have low sensitivity and high specificity… which are more handy as these can be used to rule in (SPIN) a pathology by giving a positive result . As studies would say, these tests lack a degree of ‘anatomical validity’ or ‘structural differentiation’, and so should be used in conjunction with a full clinical history along with other physical movements and comparable signs. Testing is still essential as the majority of people cannot/will not have access to gold standard tests (mostly imaging). More to the point, they do not always need gold standard testing if they are free from red flags. Those paying the big bucks for private medical health however may want definitive testing. So to be the best in our role we need to know pathological red flags, understand our tests and kick ass with solid clinical reasoning.

Although ive split the sections of ‘impingement’ and rotator cuff lesions please note there is in fact quite an overlap between the two in terms of testing. Meaning a positive impingement test is likely to also be positive for a Rotator Cuff Lesion (RCL), and vice versa. So when testing for its important to take extra care to distinguish between a tear or an impingement. On one hand we could say weakness is often the trade mark of a tear… but when the patient is in pain, as they often are, how will you know if your testing the true strength or the pain inhibited strength?

As the name says ‘Sub –Acromial’… we are looking to test the structures in this space such as: Rotator cuff, Biceps tendon, Bursa.

Pathology of the rotator cuff and subacromial bursa is considered to be the principal cause of pain and symptoms arising from the shoulder. – J. Lewis 2008

This quote by shoulder specialist Jeremy Lewis suggests the biceps tendon is the ‘less likely culprit’ in shoulder pain. Of course you should never rule anything out, but you could look to support/deduct other structures from your hypotheses first, subject to your initial anamnesis.

The movement we all know which produces complaints is the shoulder abduction/flexion/over head movement… what we expect to clinically present itself in the painful arc range, adding to our sub acromial impingement suspicions.

In testing, your patient perform active movements (passive also if there are active limitations found) with end range overpressures. Functional combinations such as the Apleys IR/ER scratch test are good additions also, however be aware of shoulder compensations such as protraction during IR. An External Rotation (ER) resistance test is a quick an easy early test to determine the Rotator Cuffs (RC) sensibility. If active ROM is as limited as passive then you can consider Adhesive capsulitis (frozen shoulder).

Having a good cluster of tests can strengthen your ‘diagnostic indication’. By stressing the tissues in different ways to include and exclude our suspect tissues.

The 5 tests I would recommend are:

Of these you generally need at least 3 of the 5 to be positive, which would give a moderate indication for impingement (as a mechanical cause of the SAPS). These 5 tests are your symptom provoking procedures testing the tissues which you are blind to. Knowing how and why they work will give you confidence and tools to clinically reason.

As you can imagine, some things in physiotherapy get over simplified in the attempt to improve understanding. Here are a couple of things which are unclear or mistaken in much literature:

If you remember above how I used the phrase ‘ER resistance test’ (neutral with 90’ elbow flexion). Many sources misleadingly call this the ‘infraspinatus test’. In reality, the Supraspinatus (SS) is highly active in this position also. So don’t let a positive ‘infraspinatus test’ lead you to think the infraspinatus alone causes the pain.

When evaluating the Rotator Cuff (RC) im sure one test which pops to mind is the Empty Can test, also called the Supraspinatus test. Again, this doesn’t specifically test the supraspinatus either as Boettcher et al 2009 found. – As we mentioned in the beginning, this is all goes with us NOT trying to be too specific with these tests. – The supraspinatus PLUS infraspinatus and subscapularis are very active in both empty-can and full-can testing, so either muscle activation can produce pain. All tendons fuse together on insertion and so any tendonitis could be agitated by adjacent tensions.

IF you want to get fancy, to test the RC tendon integrity (how intact it is), you should use the Full can test. This is because the shoulder position causes less tissue compression… and so its less likely that ‘pain weakness’ will interfere with your testing (1).

Lastly, the supraspinatus muscle doesn’t initiate the first 20’ of abduction, it cant take any credit for initiating even the first 5’ as it is not recruited any earlier than other surrounding shoulder muscles. (Reed et al 2012, Wattanaprakornkul et al 2011)

For interesting points on rotator cuff activation, see this page.

Back to testing, here is the 5 test cluster:

From these 5, lets think about whats happening in a mechanical sense: 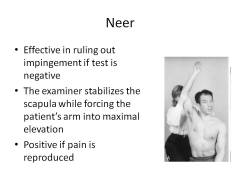 So as you may have noticed, only 3 of those tests aim to impinge tissues, and the other 2 aim to elicit pain by straining a damaged tendon or muscle of the rotator cuff. Does that mean that only 3 are ‘impingement tests’? Has repetitive impingement (misuse and/or overuse) caused COMPRESSION/FRICTION tissue damage and so an inflammatory response in the tissues? Have these inflammatory chemicals caused the tissue swelling and pain sensitivity in an attempt to protect against future compression?

OR are we looking at damage to the RC musculotendinous tissues from mechanical TENSION (strain or sprain). Pain is the common complaint, but what can we do to differentiate? As we know, inflammation has the tendency to spread to adjacent tissues and so RC inflammation from an overload injury could spread to the bursa (or vice versa) to cause a positive impingement sign… don’t shoot the messenger here 😉

–> So thats it? A physical therapists diagnosis is done by simply reproducing symptoms?

Thankfully not! There is of course much more we can do other than provoke the symptoms, we can further complete the picture by looking at what can relieve or change symptoms. Taking a painful movement and varying the kinematics slightly to modify symptoms provides a whole new angle of approach.

So once your initial testing results are interpreted, if impingement seems likely, the next useful tool can be the Shoulder Symptom Modification Procedure (SSMP) produced by Jeremy Lewis.

This is a logical approach which is used not only to assess… but also to guide the PT in clinical decision making while determining which corrective treatment may be best. Can you think of where you may have used something similar already? It runs off a similar angle of testing as the Scapular Assistance Test (SAT) and Scapular Resistance Test (SRT) which we will come onto later. Many factors can effect muscle strength, length, activation and static posture. This can be due to pain, daily activity and posture which can then cause the pectoralis minor to adaptively shorten. Borstad in a 2008 study found individuals with a relatively short pectoralis minor demonstrate scapular kinematic alterations that have been associated with shoulder impingement. As the pectoralis minor can protract the shoulder, repositioning it into neutral to retest a movement is an example used within the SSMP. Image below shows J. Lewis’ 2009 SSMP model. 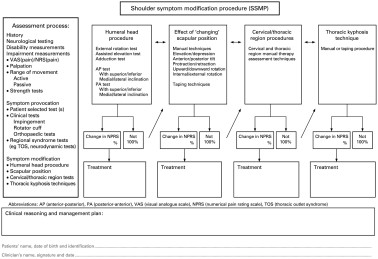 From all the previous sections where we have talked about scapulohumeral rhythm, we have a good understanding that the position of the shoulder girdle in relation to the humerus determines how the surrounding tissues are strained in movement. The SSMP is built on this principle, and follows on to give great reasoning ability and treatment indicators.

And that’s near everything for this SAPS section!

This last part is on internal impingement which is an adjunct complication possible. Ive kept it last as it is not really in the category of SAPS… and you should know its cause or pathological mechanism isn’t completely understood. But heres what we know:

In testing, an internal impingement pathology usually produces complaints in the POSTERIOR area of the shoulder… this pain is exacerbated by abduction with an ER and horizontal extension movement.

By definition:
“Internal impingement is commonly described as a condition characterized by excessive or repetitive contact between the posterior aspect of the greater tuberosity of the humeral head and the posterior-superior aspect of the glenoid rim when the arm is placed in extreme ranges of abduction and external rotation. This ultimately leads to impingement of the rotator cuff tendons (supraspinatus/infraspinatus) and the glenoid labrum.” – Physio-pedia.com

So can we differentiate this from subacromial impingement easily?

What are the causes for it?

There are three common underlying factors seen throughout the literature that have been shown to contribute to this disorder.

NB: Don’t forget GIRD can also be caused by humeral torsion angle! Especially/mostly in throwers. In this case, sleeper stretching the hell out of an arm with IR ROM restrictions will do more bad than good…

…When GIRD is capsular (often seen in throwing patients), contracture of the posterior-inferior GH ligament (PB-IGHL in pic) shifts the glenohumeral articulation point posterior and superiorly (2). This allows for more external rotation during pitching… BUT adds to the impingement condition as well. Supporting this, another study showed damage to this ligament allowed significant ER gains (3). Now we can understand why stretching of the inferior-posterior GH capsule in throwers can treat and prevent impingement.

Recently, a small number of tests were created to help rule in/out the presence of internal impingement.

Some physio thoughts to finish off:

QUESTION 1: Could you add resistance to a jobe test to differentiate between the bursa and the tendon involvement?

Well this is basically the difference between an O’Briens test and the Hawkins Kennedy (except with the extended elbow and resistance applied).

The HK is for SA impingement and the O’Briens tests primarily for a SLAP lesion!

QUESTION 2: Can you think of other tests which are similar?

The Speeds test ( originally designed to assess for bicipital tendonitis in its groove.. but also utilised to assess for SLAP lesions) is like the empty and full can test but is done in 90’ ante flexion (as opposed to scaption). Can you think why these two positions change the structures tested?

QUESTION 3: Whats the difference between a posterior impingement test and an apprehension test?

The subjective response! Is it posterior pain or a feeling of instability they have? The relocation test can confirm either, but don’t forget joint laxity also can cause internal impingement.

But what if pain presents still after relocating the humeral head posteriorly? That could indicate a SLAP tear… how can we then differentiate? …By adding resistance to elbow flexion you will put the biceps tendon on strain… an increase in pain would support a SLAP injury. Good thoughts to help develop that critical thinking 😉

I hope you enjoyed reading! Please comment your own views and stay tuned for the next section where I will cover Instability testing of the shoulder. As always, you can follow my Facebook page JC Physiotherapy for frequent physiotherapy content.