I cannot express how important this rule is to understand, as it provides a lot of the logic in why joint articulations work well… and why pathology can occur when altered (described in my impingement/instability articles).

The distal femur is convex, its articulates on the tibia which is concave (due to meniscus). Take the bone which is moving, in this case its the tibia. It is conCAVE, which means its surface will slide in the SAME direction as the bone’s movement. (picture 1, and top articulation of picture 2)

Take the same convex femur and concave tibia. This time the tibia is fixated, and its the femur which moves. The femur is CONVEX, so its surface will slide in the OPPOSITE direction to the femur movement (picture 3).

TIP: I always remember that people can stay TOGETHER in a CAVE. So when you have a conCAVE bone moving. Its surface will slide TOGETHER in the direction of the bone in motion. (picture 1)

Why is there a convex-concave rule?
Its all about which bone contains the axis of rotation.
In a convex bone (humeral head) it rotates around the axis which is WITHIN its head.
In a concave bone the axis is inside the other ‘fixated’ bone.

I hope this explains things clearly… like mentioned in my Impingement and Instability articles, it gives some explanation to the pathological movements of the humeral head which ‘decentralise’ it.

Information from the Convex-Concave rule can also be applied when performing manual glides. This is because the direction which an articular surface should naturally glide, is the same direction you will use for a mobilisation! So as the convex surface of the humeral head normally slides inferiorly with abduction, to mobilise for improved abduction… you would perform an inferior glide  🙂 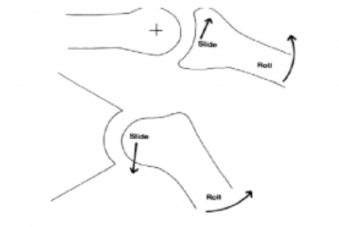 Did you find this useful? Join the Facebook pages to the right for daily posts to help boost your physio knowledge.