The Proximal Tibiofibular Joint – An interesting one!

The tibia and fibula articulate at their proximal and distal ends. Movement at the proximal tibiofibular joint is impossible without movement at the distal one.

So when does it move?

Why does it move?

2. The tibia and fibula move relative to one another due to tensions through the interosseus membrane.

3. As the knee flexes, the proximal fibula moves anteriorly with relative relaxation of the fibular collateral ligament (FCL) and the biceps femoris (BF) while with knee extension, these structures become taut and pull the fibula posteriorly.

EXTRA:
The fibular collateral ligament can transmit tensile force to the fibula head. In external tibia rotation, this tensile force vector is oriented anteriorly, causing anterior motion of the head of the fibula, and vice versa for internal rotation.

Studies have also observed increased rotation of the fibula at the PTFJ in horizontal variants versus the oblique variants. (as seen in photo below). 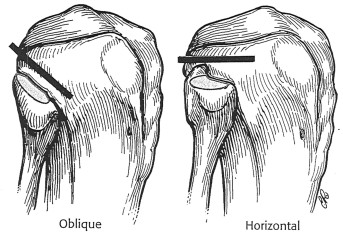